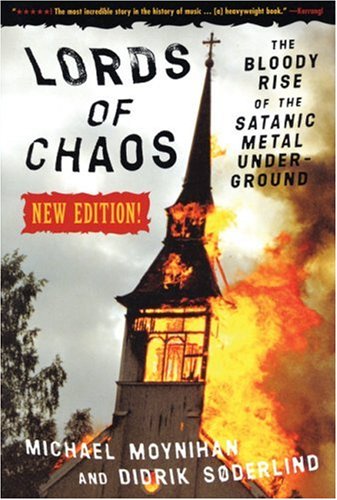 Lords of Chaos: The Bloody Rise of the Satanic Metal Underground

Michael Moynihan – Lords of Chaos: The Bloody Rise of the Satanic Metal Underground.

Lords of Chaos: The Bloody Rise of the Satanic Metal Underground

Lords of Chaos: The Bloody Rise of the Satanic Metal Underground is a book by Michael Moynihan and Didrik Søderlind. The book presents itself as a non-fiction account of the early Norwegian black metal scene, with a focus on the string of church burnings and murders that occurred in the country around 1993. The book has been the subject of controversy over the alleged political leanings of author Michael Moynihan, though Moynihan denies these allegations.

Lords of Chaos was originally published by Feral House in 1998, and a second, revised edition was released in 2003 and expands the original book by fifty pages. This is that revised edition.

The book focuses on the scene surrounding the extreme heavy metal sub-genre black metal in Norway between 1990 and 1993. The first few chapters give an outline of the progression of heavy metal from bands such as Black Sabbath, Coven, and Black Widow to proto-black metal bands such as Bathory, Mercyful Fate, and Venom and finally to the early Norwegian black metal band Mayhem. The book then details the April 1991 suicide of Mayhem front man Per Yngve „Dead” Ohlin and the formation of a radicalized „inner circle” around Øystein „Euronymous” Aarseth, based out of his small black metal retail shop Helvete (Norwegian for „hell”) in Oslo, Norway.

In 1992 and 1993, members of the group became connected with a series of crimes, starting with the arson of the Fantoft stave church on June 6, 1992, although the book mentions that there had previously been a „small, ineffectual fire at Storeveit Church.”. Church arsons continued but with a steady decline up until the year 1995. (The cover of Lords of Chaos shows a „19th Century Swedish church in flames”).

An interview in a Norwegian Newspaper given by Burzum founder Varg „Count Grishnackh” Vikernes, also a member of the Helvete group, leads to a media outrage condemning the arsons as acts of Satanism. On August 21, 1992 Bård „Faust” Eithun of the band Emperor murdered a homosexual man in the Olympic Park in Lillehammer. He was subsequently convicted of this crime and sentenced to 14 years in prison (of which he subsequently served nine years before being released in 2003). On August 10, 1993 Aarseth was murdered by Vikernes, who received a 21 years sentence for the murder and several cases of arson related to the church burnings.

The book also mentions other cases of „satanic” murderers, such as that of Sandro Beyer by members of the German National Socialist black metal band Absurd and Caleb Fairley in the USA. It also devotes several pages to the case of a self-styled teen militia named „Lords of Chaos” that perpetrated murder and arson in Fort Myers, Florida in April 1996, but does not mention why the title Lords of Chaos was chosen for the book.

Interview passages with Varg Vikernes are spread out through several sections of the book. Vikernes has said that he would not use the term Nazi any longer as self-descriptor, however, the statement is ambiguous. An interview with Vikernes about Nasjonal Samling founder Vidkun Quisling, executed in 1945 for High treason by the Norwegian government after the occupation of Norway by Nazi Germany, is the main source for Vikernes admiration of him, and the source for the rumor that Quisling had some influence on certain extreme strains of Norwegian black metal.

The book presents other interviews with Anton LaVey, founder of the Church of Satan, Tomas „Samoth” Haugen of Emperor and Dani Filth of Cradle of Filth. Filth claims the existence of a „Satanic Gestapo”, when he recounts an incident where he was apparently attacked on stage with a knife (which he states may have been a prop) during a concert in Germany.

The book puts forward its own thesis about the reason behind the extreme music, the arsons and the cases of murder, interpreting these events as the appearance of an odinic archetype. Within this scope, the psychologist Carl Jung is quoted and also a study Pathological firesetting from the year 1951. Satanism and the heathenism from which it ultimately descends are themselves the products of the archetypes and differentiated psyches of nations and peoples, and they therefore spring from the same “occult” or mystical sources as nationalism itself. Nationalism is the political manifestation of a folk’s unconscious; heathenism/Satanism is the spiritual manifestation.

The book goes on to compare the state sought by the commission of these violent acts with the apocalyptic Norse tale Ragnarök, but states that neither radicalized black metallers nor „their occasional allies, the right wing revolutionaries” may have found „the fuse on the powderkeg of alienated resentment which lies behind the façade of 20th century civilisation”, yet that such a „powderkeg” exists nonetheless.

Michael Moynihan - Lords of Chaos: The Bloody Rise of the Satanic Metal Underground.