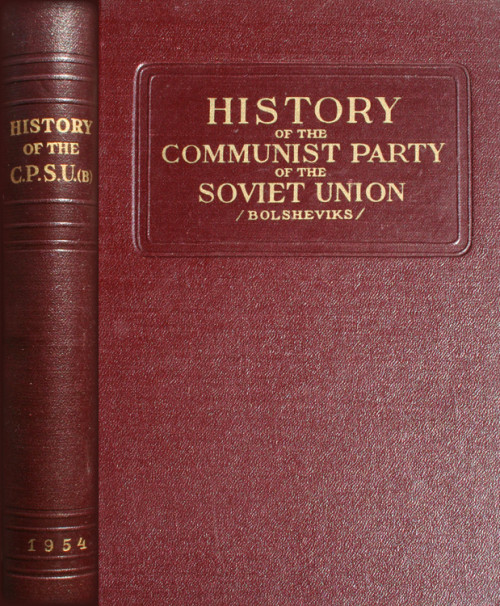 History of the Communist Party of the Soviet Union

I.V. Stalin (coord.) – History of the Communist Party of the Soviet Union.

History of the Communist Party of the Soviet Union

History of Communist Party of the Soviet Union (Bolsheviks).

The book was commissioned by Stalin in 1935. Regarding the motives for compiling it, Robert Service quoted a Bolshevik official who told there was a need for a book which “in stead of the Bible” would “give a rigorous answer… To the many important questions.” At the time, Stalin was concerned with the abundance of publications about the AUCP (B)’s history and sought to have a single, authoritative book which would source as an official interpretation of the subject. The book was written by a team of historians and party ideologues; the principal authors were Vilhelms Knoriņš, Yemelyan Yaroslavsky and Pyotr Pospelov. Stalin wrote the chapter about ‘Dialectical materialism’ and “closely supervised” the others: Service wrote that “to most intents and purposes he was the general editor.”

In 1937, a draft was submitted to Stalin, who in turn requested several revisions to the text, including more historical background. On 16 April, the Politburo decreed that Knoriņš, Yaroslavsky and Pospelov would be relieved from all their other party obligations for a period of four months in order to complete the book.

Between the 8th and 17th of September 1938, Pospelov, Yaroslavsky, Andrei Zhdanov and Vyacheslav Molotov met daily with Stalin in his office at the Kremlin to make the last edits to the manuscript. Knoriņš was arrested in the Great Purge and executed on 29 July that year. The first chapter appeared in Pravda on the 9th, and the rest of the text was published in serial form, the last chapter on the 19th. On that day, the Politburo concluded to have a first edition of six million copies, that would each cost a particularly low price – three rubles a piece, equivalent to that of a liter and half milk at the time. On 1 October, the book was released.

On 14 November, the Central Committee issued a resolution On Conduct of Party Propaganda in Connection with the Publication of the Short Course, stating it “ends all arbitrariness and confusion in the presentation of Party history” and turning the book to mandatory reading in the curriculum of all university students and attendants of Party schools.

In 1956, Nikita Khruschev formally repudiated the book at his Secret Speech. A new authoritative history of the Party, written by a team headed by Boris Ponomarev, was published in 1962 under the name ‘The History of the Communist Party of the Soviet Union’.

I.V. Stalin - History of the Communist Party of the Soviet Union.